The Korean Chain Caffebene To Face Some Troubles In an attempt to hunt steady profit sources the coffee chain invaded foreign markets as well, with China and US being the worth mentioning countries in terms of the number of outlets, but results aren’t any better there either. The number of Chinese outlets, where Caffebene made its entry in 2012 (koreatimes.co.kr), dropped from 600 in 2014 to 400 shops counted in April this year. If the claimed Southeast Asian outlets are taken into the count, the coffee chain has some 1,364 outlets worldwide compared to the 1,560 outlets owned two years ago. The number of Korean outlets has decreased from 912 in 2014 to 850 over the same amount of time (Forbes).

With more than 30 coffee chains operating in Korea and even more expected to enter the market in coming years, re-emerging as a coffee giant for Caffebene seems like a daunting task. According to the analysts (koreatimes.co.kr), Caffebene should have prepared a more secure foundation at home before going into the foreign markets, keeping in mind that foreign projects usually take up to ten years before they start making any money.

This isn’t the only reason the fast growth is proving unsustainable. The other troubles include the high paid bonuses to the Caffebene reps per franchisee they scored, the quality and lag in the distribution of supplies, lack of any support from the corporate towards the Franchisees and series of law suits filed against the company either demanding back and future rent on leases that Caffebene vacated (the company says the matters are closed now) or by the franchisees claiming they were made (unauthorized) promises of receiving returns within certain periods by the Caffebene reps. Even though according to the US marketing manager Lee Sohyeong, the disclosure document from 2015 does not contain even a single line indicating such promises anywhere in the contract (Forbes).

The company founder Kim Sun-kwon stepped down in favor of Choi Seung-woo, who is now the new CEO at Caffebene since last October. Kim looks forward to attract investment from a private equity firm. Last December Kim also gave up his controlling stakes which have now fallen to 7.3% from 49.5% previously. The fund now owns an 84.2% stake in the company (Koreatimes.co.kr).

According to the Caffebene officials, with the vigorous changes the company will try its best to turn things around the running year and mend the now-smeared image of the brand (Koreatimes.co.kr). 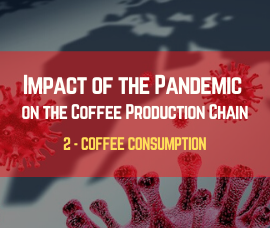 Covid-19: Impact of the Pandemic on Coffee Consumption (Part 2)